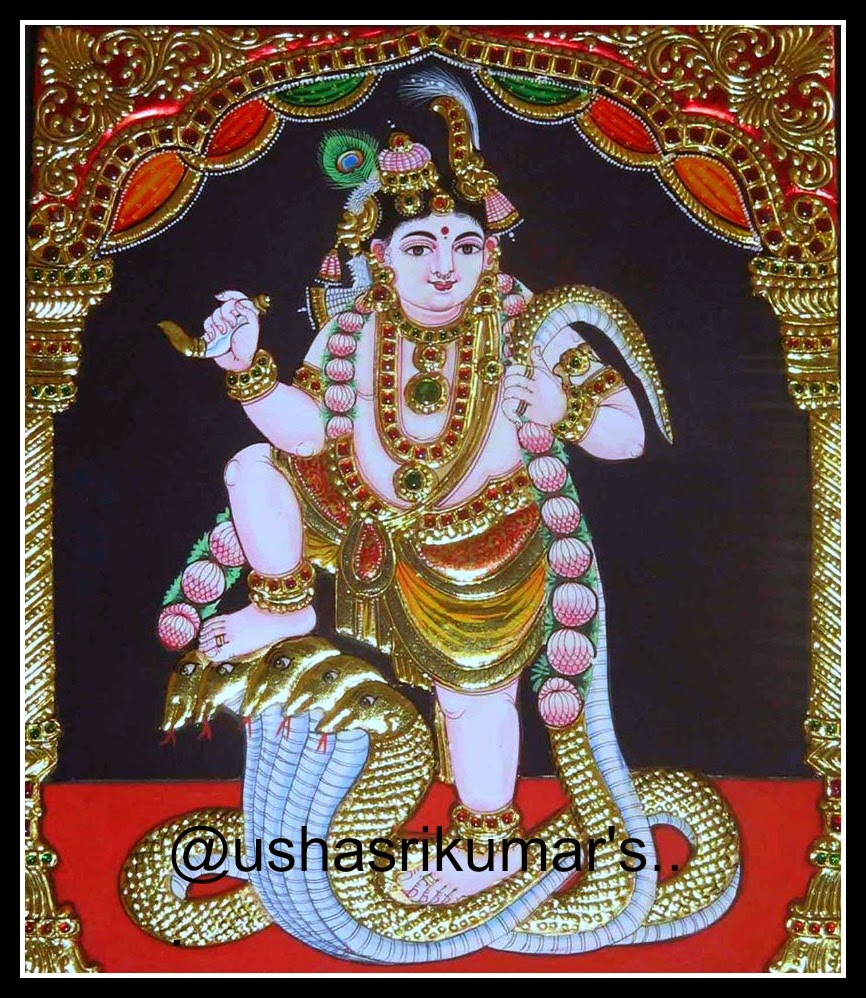 depicted in my tanjore painting,

Here is the story of Kaliya marthan or Kalinga nardhanam...

Kaliya (IAST:Kāliya, Devanagari: कालिय), in Hindu mythology, was the name of a poisonous Naga living in the Yamuna River, in Vrindavan. The water of the Yamuna for four leagues all around him boiled and bubbled with poison. No bird or beast could go near, and only one solitary Kadamba tree grew on the river bank.
The proper home of Kāliya was Ramanaka Dwipa, but he had been driven away from there by fear of Garuda, the foe of all serpents. Garuda had been cursed by a yogi dwelling at Vrindavan so that he could not come to Vrindavan without meeting his death. Therefore Kāliya chose Vrindavan as his residence, knowing it was the only place where Garuda could not come.
Once Krishna and herdboys were playing ball, and while playing Krishna climbed up the Kadamba tree and hung over the river bank, the ball fell into the river and Krishna jumped after it. Kāliya rose up with his hundred and ten hoods vomiting poison and wrapped himself around Krishna's body. Krishna became so huge that Kāliya had to release him. So Krishna saved himself from every attack, and when he saw the Brij folk were so much afraid he suddenly sprang into Kāliya's head and assumed the weight of the whole universe, and danced on the naga's heads, beating time with his feet. Then Kāliya began to die. But then the naga's wives came and prayed to Krishna with joined palms, worshipping Krishna and praying for their husband.


Kāliya, recognizing the greatness of Krishna, surrendered, promising he would not harass anybody. So Krishna pardoned him and then let him go free to leave the river and go to Ramanaka Dwipa...
(Story courtey-Wiki)

All the images of paintings ,crafts ,food etc. are my own works and shall not be copied or reproduced without my consent.

Promote Your Page Too